Heron Bros. are immensely proud of Apprentice Engineer Annie Crozier on her achievement of being announced as the inaugural winner of the Construction Employers’ Federation Apprentice of the Year in the Construction Person of the Year Awards. Annie’s enthusiasm for the job and the industry is infectious and she proactively seeks to improve her knowledge of developing construction technologies. Annie has shown a positive approach to career development, proactively completing CPD that will improve her engineering competencies, as well as demonstrating strong leadership and teamwork skills both on site and through providing mentorship to placement and graduate engineers at Heron Bros.

What does it mean to you to be the CEF apprentice of the year?

I am absolutely honoured and delighted to have won the CEF Apprentice of the Year. I am very grateful for the opportunities and support Heron Bros. have provided me with so far in my career. It is very encouraging to have been recognised for this award and I’m excited to see what lies ahead in the future. 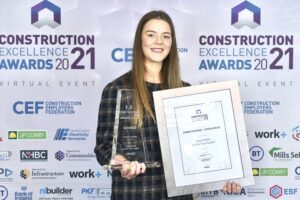 How long did the process take and what did it entail?

I was nominated for the award in April 2021 and received word that I had been shortlisted as a finalist in June. As a finalist I was required to carry out a 45-minute interview with a judging panel in August, which included a presentation and a Q&A to show how I met the criteria for the award.

What made you want to pursue a career in the construction industry?

Growing up into a family who are involved in construction I have always been intrigued by the way something can come from nothing. Being able to watch various projects beginning with a green field site, to the end product of a house, apartment block or large shed, which then became someone’s home or new business premises, always intrigued me and I always said I wanted to be able to achieve similar in the future. After I finished school, I travelled around Australia for 10 months, where I saw the world of Engineering portrayed even more. It was also very obvious that there was a greater number of women on site, which give me a further push to pursue a career in Civil Engineering.

What was your route into the construction industry?

After completing my A-Levels I took a gap year to travel to Australia, before I applied with Heron Bros. to complete an apprenticeship in Civil Engineering. This was a two-year course, which required me to attend South West College in Omagh one day a week studying a course in Civil and Environmental Engineering, whilst gaining experiencing working with Heron Bros. the remaining four days on site.

After achieving a distinction in my Foundation Degree, I made the decision to further my studies in Civil Engineering. I am currently studying BEng Civil Engineering at Ulster University and I hope to graduate in June 2022.

How do you hope your career to develop?

I hope to graduate next year whilst continuing to gain experience, building on my skills on site as an Engineer. I am lucky to have had the opportunity to experience many different aspects of a job from start through to finish, on a range of different projects.

From being involved in the digitisation with Heron Bros., my eyes have opened to the abundance of opportunities available through the digital revolution in transforming the construction industry and I am very keen to be involved.

My ultimate desire is to become a Chartered Civil Engineer with ICE or CIOB. I aspire to continually progress, develop and advance in my career with Heron Brothers, following the clear progression pathway that has been set out. 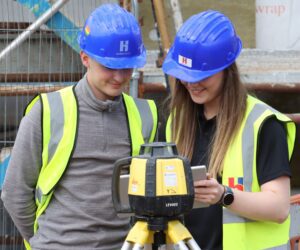 Why did you choose the apprenticeship route as opposed to full time further education?

I have always been a hands-on learner, so learning through doing as an apprentice as opposed to being classroom based as a full-time student, was always going to be a positive.

Studying through apprenticeship gave me a greater insight into Civil Engineering, as you had the chance to convert your knowledge from modules onto site and vice versa, and helped me to gain skills I wouldn’t have got from class alone.

As an apprentice you are given the opportunity to ‘earn while you learn’. Not only to earn money, but earn experience, skills, professional relationships and networks, potential and independence.

Learning through apprenticeship allows you to gain a wealth of knowledge and a greater understanding of the role of an Engineer, through hands on learning, before even becoming qualified. I would recommend an apprenticeship to anyone thinking of getting into the construction industry as it is in my opinion, the best route to pursue a career in engineering.

What skills do you believe you have that have allowed you to be successful thus far in your career as an apprentice engineer?

I would say that I am very driven and determined to work hard to do well in my career. I pride myself in being a hard worker and strive to complete all tasks to the highest standard, both at work and in my studies. I always strive to be the best I can be.

Enthusiasm, willingness to learn and the motivation to succeed, improve and progress play a big part of being an apprentice engineer, as you are constantly learning new skills on the job every day.

I have realised the importance of confidence, confidence in myself, the role and communication with others.

What projects have you enjoyed working on and why since joining Heron Bros.?

I have been lucky to have been involved in the delivery of five construction projects, and have recently began on my sixth. It’s difficult to pick just one as I’ve got to experience a wide variety of stages within each of the projects.

I enjoyed my first project Brook Leisure Centre in Belfast, which was part of the £105 million Belfast Leisure Transformation Project. I found this project very interesting and thought it was a great site to begin my apprenticeship, as there was so much variety as to the jobs that were being carried out. As this was one of the bigger projects going on at this time, I got to shadow a calibre of experienced engineers.

For me, the turning point in my career, where I gained more confidence in myself, was the Heron Bros. plant maintenance garage. Although it wasn’t a massive project, it was a massive project to me as I was the only engineer along with a project manager for the majority of the job. I was given a lot of responsibility on site early on in my career, which was very reassuring and made me confident of the opportunities I would have as an Engineer with Heron Bros. There were so many different aspects in such a small project, which I really enjoyed and felt it allowed me to learn a lot.

I am currently working on the £40 million Northern Regional College campus in Coleraine. I am really looking forward to see the project develop through the different stages through to completion and am excited to be a part of the team in its delivery. 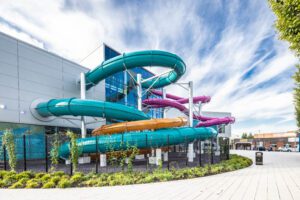 How important has mentoring from experienced engineers at Heron Bros. been to your development as an apprentice engineer?

The mentoring I have received from experienced engineers at Heron Bros. has been second to none and is one of the things I am most grateful for. Without it I wouldn’t be where I am today. Coming into the construction industry as an apprentice I was dependent on the training I received from engineers, learning from their past experiences and gaining the knowledge and skills I needed to grow as engineer.

Every engineer I have worked with has been very supportive and more than helpful, giving me the guidance to develop in my career.

As a career why would you recommend the construction industry to women?

There is so much diversity within the Construction industry, no working day is the same. The opportunities and career paths are endless with Civil Engineering and it is a very rewarding industry to be a part of. I would promote the role to any other female who enjoys being outdoors and learning something new every day. 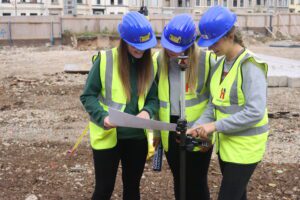