The Farrans-Heron Joint Venture is just weeks away from completing the first mental health hospital to be built on Merseyside in 25 years.

At a cost of £25m, the Clock View facility, on the site of the former Walton hospital, will treat local people for a range of mental health issues including depression, anxiety and dementia, providing 80 individual bedrooms all with en-suite bathroom. It will also accommodate the city’s new psychiatric intensive care unit for those most in distress in need of urgent inpatient care.

Building work started in spring 2013 and during its construction phase the £25 million scheme has boosted local employment in the building sector and brought back into health use the site of the former Walton Hospital.

During a site visit the Lord Mayor, Cllr Kemp said: “It is lovely to see how this site has been regenerated and with the involvement of so many people, organisations and schools from the local community, working together not only on the design but also the artwork which will feature in this great new facility.”

The hospital is the first of four projects within the Merseycare TIME Project Framework totalling £85m. It will be officially handed over on December 19 and ready to see patients by the end of March next year. 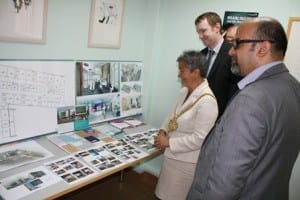