Home > News > Martin O’Kane elected as President of The CEF

Martin takes on the mantle from John Tracey, of Tracey Bros, who served from 2020 to 2022. Martin led the congratulations and appreciation for Johns work in his opening speech before accepting his election to the role. 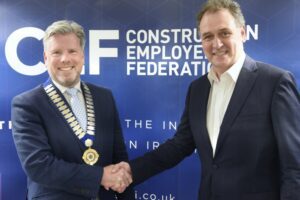 Martin stated “Thank you very much for electing me as president of the CEF, it’s a great honour for me personally, but also for Heron Bros, as it’s the first time anyone from the company has held this position.”

Martin has BSc Hons in Quantity Surveying from the University of Ulster, a Diploma in Project Management from Queens University, Belfast and became a Fellow in the RICS in 2015.

Originating from Limavady, Martin joined Heron Bros in 1994 and became a director in 1999, then progressed to Deputy Managing Director in 2005 and Deputy Group Managing Director in 2011. He is currently responsible for the Groups Construction Division and the development of the company’s property portfolio throughout the UK, Ireland and Europe.

Everyone at Heron Bros. is extremely proud and wish Martin every success in the role of CEF President.

We look forward to working closely with the CEF to advancing the construction industry in Northern Ireland and Building The Future Together. 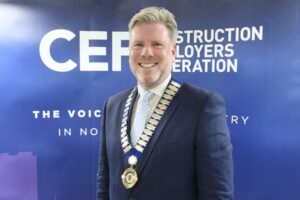