Considerate Constructors Scheme awards Foyle College and Ebrington Primary School & Nursery, Londonderry, with Most Considerate Site in category of projects with a value of £10m to <£50m

This prestigious national accolade was for the Foyle College and Ebrington Primary School & Nursery, Londonderry. This ongoing contract involves the construction of a new college, primary school and nursery on the site of a former army barracks in a residential area of Londonderry. 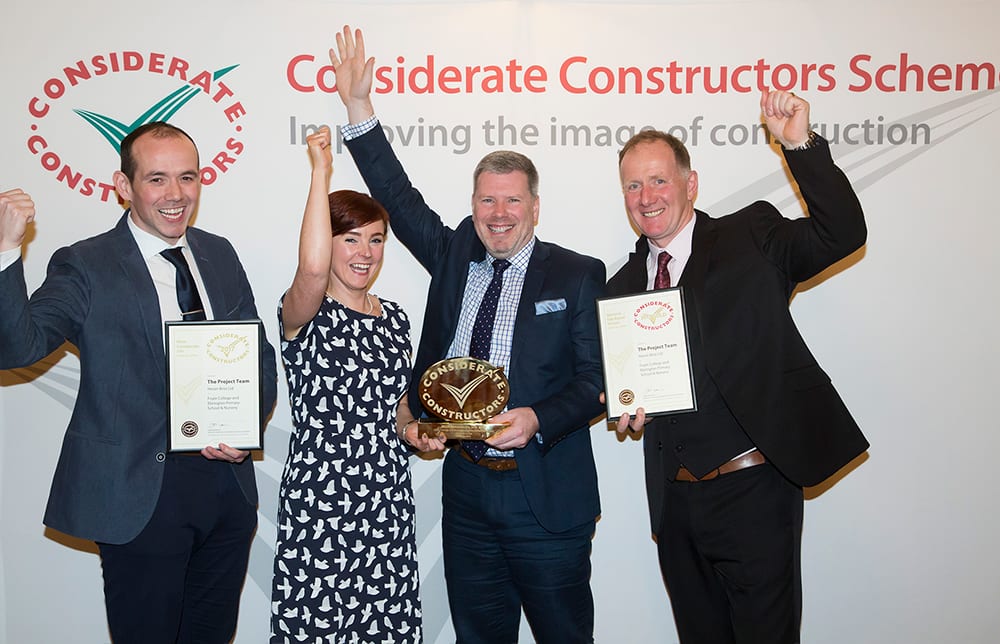 The award, presented at Plaisterers’ Hall, London, on 7 April 2017 was given within the category of sites with a project value of £10m to <£50m.

The Scheme’s National Site Awards are one of the most revered accolades within the UK construction industry. They recognise Scheme-registered sites that have demonstrated the very highest level of consideration in respect of the community, environment and workforce.

The site was praised by the Scheme for its outstanding appearance as a result of initiatives including the ‘Start Smart Campaign’, and a weekly Tidy Friday.

Community engagement included many goodwill activities such as sponsored walks for schools and charities, volunteering work and sponsorship of the local marathon. The site’s ‘Scheme Champion’ attended a careers’ fair for the travelling community, as well as promoting job opportunities on site.

First class efforts to protect the environment included a carbon offsetting landscaping plan which involved 1,000 trees and shrubbery. Company safety was also highly considered and included incentivised feedback, and use of a behavioural management strategy.

The whole approach of the project demonstrated modern construction at its very best and the site had considerate practices in place that were exceptional across the board.

Heron Bros was also awarded a covetted Gold Award for their Forthriver Innovation Factory project. This highlights their commitment to improving the image of the construction industry by striving to promote and achieve best practice across their projects.

The awards ceremonies, which attracted over 3000 guests from construction sites of all different sizes across the UK, were held from 20 March to 7 April in Edinburgh, London and Manchester.

Martin O’Kane Deputy Group Managing Director at Heron Bros said: “We are delighted to have our Foyle College and Ebrington Primary School and Nursery project awarded the “Most Considerate Site 2017 for £10m – £50m Projects” at the CCS National Site Awards.

“We are incredibly proud of our whole project team and their dedication to operating our construction site to such a high standard. Heron Bros is committed to investing in the Considerate Constructors Scheme across our projects and recognise the value it adds to our business and the communities in which we work.”

“The successes of award-winning sites demonstrate the importance of embedding the core principles of the Scheme’s Code of Considerate Practice, creating a positive long-term legacy for the local community, environment and workforce.”

To find out more about the 2017 National Site Awards and search the database listing all winners, click here.